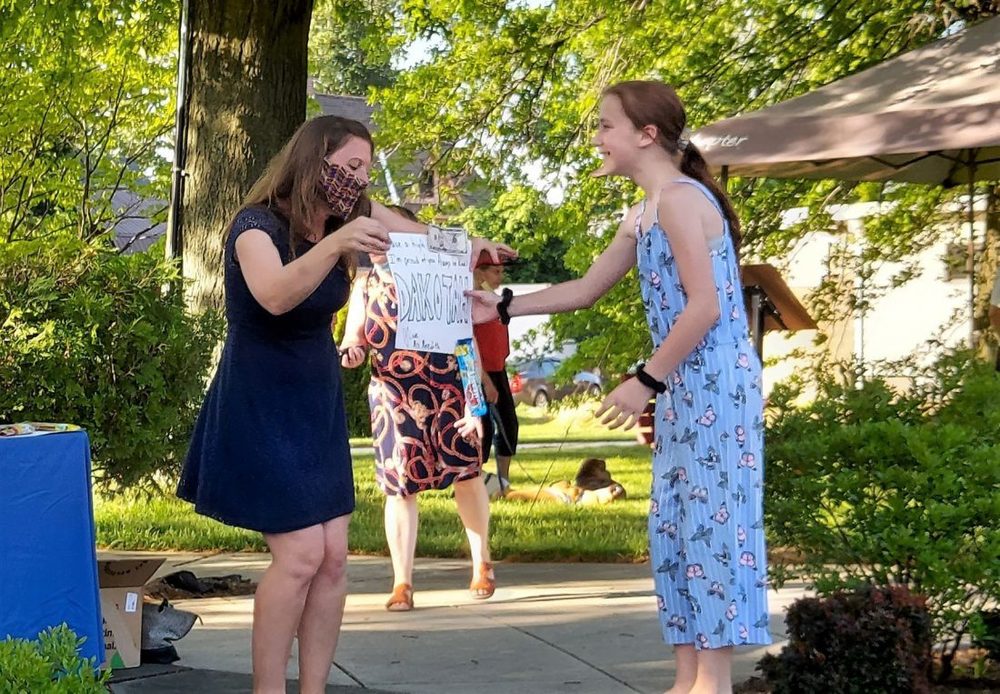 RIPLEY — The air was filled with “Pomp and Circumstance” and the people were applauding wildly, but no students walked down the aisle at Ripley Central School District’s sixth-grade graduation. Rather, a procession of decorated vehicles made their way along Main Street, escorted front and back by vehicles from the Ripley Fire Department.

Ripley Superintendent William Caldwell, Principal Micah Oldham and sixth-grade teacher Erika Meredith stood before the veteran’s monument in front of the school building. As each vehicle paused before the monument, one of the 21 graduating six students hopped out to be presented with an envelope containing their diploma and awards for the year.

“This class is one of my favorite classes of all time. They are a great group of kids,” Oldham said. “They’ve been excellent and 90-plus percent of the kids did everything Ms. Meredith asked them to do.”

Oldham said that he was very impressed with how this sixth grade class dealt with the school closure. ” When the governor said the school was going to close, the big question was could we finish strong, and this class did it,” he said.

Caldwell said the sixth grade class impressed him, as well. “They’ve done such a great job,” he said. “I’m very proud of them, of who they are and what they try and are willing to do.”

He noted that despite the school closing, the sixth graders were challenged to do high quality work. “The work Ms. Meredith expected of them was top notch and they delivered,” he said.

Meredith said that the teachers tried to adapt to each student’s particular situation. “We still had high expectations, but we had to consider everyone’s home life,” she said.

Caldwell said the district wanted to do something very special to recognize their 6th grade students. He said he was very pleased with the turn-out and the enthusiasm that residents showed for the graduating class. “I think this is one of the best ways we could have done this,” he said.

One person who attended the graduation exercises and asked not to be named, said she was amazed by the ceremony. “I was very moved by this year’s 6th grade graduation. It was far more emotional than I expected, with Pomp and Circumstance playing in the background and the festive atmosphere here in the park.” she said. “Perhaps the district should consider doing it this way every year.”